Museum Village Hösseringen
The museum village shows 27 several typical buildings and a collection of 45.000 objects from the period of 1600 to 1950. In the buildings, the country work and life is presented.

Residence Castle Celle
The castle of Celle ist one of the most beautiful castles of the Welfes and was first mentioned in 1318. In the castle you will find furthermore the residence museum and the oldest, today recorded baroque theater in Europe which has an own ensemble.

Bomann-Museum
This mueseum is one of the biggest historico-cultural museums in Lower Saxony. It shows collections of Eastern Lower Saxony's folklore, the city history of Celle and the national history of the former kingdom Hannover.

Heath Monasteries
Since more than 800 years the heath monasteries are existing in an almost original condition. The four monasteries are located in Ebstorf,Medingen, Lüneburg and Wienhausen. In the monastery of Ebstorf is the biggest world map of the Middle Ages.

Guided Tour through Müden
Experience the 1000 years old history of one of the most beautiful villages of the Lüneburg Heath. The local tour guides knows some nice anecdotes about the village's past.

Luftbrückenmuseum Faßberg
The memorial of the airlift Berlin shows an exhibition in three Nissen huts and two closed railway cars. It is about the accomplishments of the United States Air Force and the Royal Air Force in Faßberg and their cooperation with the workers of the German Civil Labour Organisation, which were employed for the loading of coal during the Second World War. 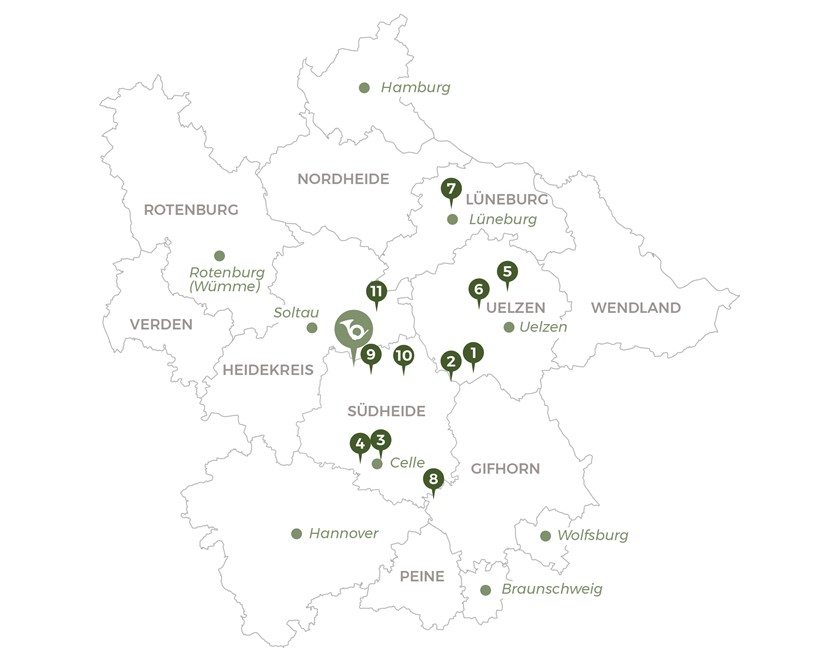